Julia Creek – we spent eight nights at this amazing little town that is on the Overlander’s Way, the route from Townsville, Queensland to Tennant Creek in the Northern Territory.

Julia Creek, population 500, is the main town in McKinley Shire, with a population of 1100, but an area of over 40,000 square kilometres. The shire has gone out of its way to make up for its small population by attracting tourists, particularly grey nomads like us.

We stayed at the Julia Creek Caravan Park and highly recommend it. It is owned by the council and the manager Phil and his son Jamie were brilliant with excellent customer service.  It has a brand new amenities block and provides four enclosed bath houses each fitted with two large claw footed bath tubs that fill with the hot artesian waters.  On Monday nights, the two pubs are closed for meals so local not-for-profit groups cook up a bush dinner at the caravan park and Council provides a free courtesy bus from the RV campsite.

The country around Julia Creek was originally stocked with sheep but drought master and brahman cattle have taken over in recent years. The town and surrounding properties are sustained with water from the Great Artesian Basin. Authorities are now managing the taking of water from the Basin far better than the early days. It is the largest and deepest artesian basin in the world covering over 1.7m square kilometres, including most of Queensland. The water comes to the surface at between 30 and 100 degrees celsius. Coal seam gas extraction is believed to be affecting the quality and quantity of water in the Basin. In Julia Creek water from the Basin is stored in in a 100,000 gallon capacity 30m wine glass shaped water tower. It is illuminated at night by a blue light and can be seen 2km away.

The town is also home to the endangered Julia Creek Dunnart, an extremely shy nocturnal hunter found on the Mitchell grass downs around the town. The marsupial is only about 160mm-240mm in length, including its tail. Their numbers were decimated by introduced species such as foxes and cats and the prickly acacia bush. To breed up their numbers, a seven kilometres fence has been erected around a section of grass downs to exclude predators. They are very timid and nocturnal, but they can be seen at the award winning ‘At the Creek’ Visitor Centre during feeding times.

After we saw the Dunnart being fed, we stayed behind and watched a number of short videos about the history of the town and local area. One of these video’s was of the towns folk talking about the naming of the creek and those who had explored the area. Burke and Wills were mentioned. Burke’s connection with the creek is unlikely, as most accounts put the explorer’s route at least 50 km west of the junction of the creek and the Cloncurry River. It became very apparent and was stated very strongly by various residents that “Burke and Wills DID NOT come to Julia Creek!” It was very funny and a few of us kept quoting that for the remainder of our stay. (One of those times you had to be there to find the humour in the situation.)

We were very fortunate to be in town when this luncheon was on and to be able to attend. The food was devine and plentiful! One of the Visitor Information ladies, Joanne, was a superb greeter and server! It was great to hear Cr Shauna Royes talk about life on the land, and meet Cr Janene Fegan and Mayor Belinda Murphy.

The pictures below show a mural depicting the early history of the town being a Cobb & Co Coach exchange, Spirit of the Light Horse Brigade sculpture outside the RSL, and the main street of Julia Creek.

So what are you? And what are we? There is no right or wrong answer and one is not necessarily better than the other. It really is just a matter of personal choice. Why then, do we ask the question?

Well this month is our two year anniversary of living “on the road.” We meet heaps of people along “that road” and we are regularly asked “where is home?” People also say to us – have a great holiday / safe journey / travel safe / have a good day / enjoy your holidays / have a great life!

We meet many people who are on their big lap of Australia. We too ask them these same questions. We are intrigued by the variety of answers. What intrigues us the most is the shortest length of time people are “doing their lap”.

The total road distance around Australia is 15,097 km’s / 9,380 miles via National Highway 1. This doesn’t include the area in the centre of Australia between Darwin and Adelaide. Based on towing a caravan as we do, averaging 500km a day, we could have driven this distance in 30 days. Therefore in two years, we could have gone around Australia approximately 24 times! The reality is……….we haven’t done one full lap yet! 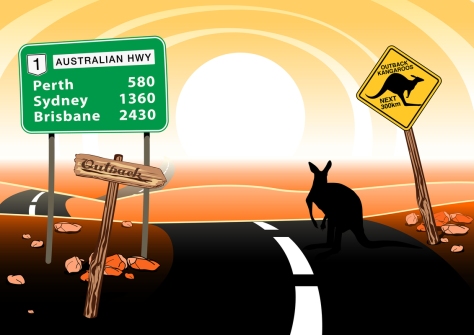 Now we fully understand there are many, many reasons why people only have a limited amount of time to travel. They may never have the opportunity to travel again, therefore they want to see as much as possible in their timeframe. PLEASE NOTE: We are not knocking anyone for the choices they make in regard to their journey.

However, it has made us assess our journey and the way we are doing it.

We read the following on a travel forum:

So why did we set off?